Sometimes, there is no better way to clear your mind than to get in the car and just drive. Your author had such a day, this past Saturday, and drove to College Park, then back home, then on to Frederick, Burkittsville (AKA Blair Witch country), Boonsboro (Annapolis Rock), then back home on a zen, introspective trek down 70/270.

The road trip was gloriously non-political, for the most part.

Don’t get me wrong. I like being active in MoCo politics. That’s why I have this project. But sometimes, we all need a break, which is why I commend those candidates who opted not to send canvassers out last weekend. While I’m not religious myself, those observing Easter or Passover Seder were probably not in the mood to talk politics with strangers (even in Takoma Park), and those who were not, were hopefully enjoying the mild, sunny weather (as Mother Nature is about to give us another middle finger tomorrow).

As candidates toiled away on questionnaires and other paperwork, I had the luxury to get away – and still, I couldn’t completely banish politics from my mind.

This is Maryland’s 8th congressional district: 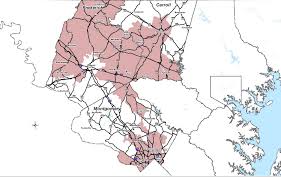 Aside from the continuing debate over whether we need to widen I-270 (my opinion: NOPE), my mind drifted to the number of congressional district lines I crossed.

College Park is partially in Anthony Brown’s district (MD-4) am duchess partially Steny Hoyer’s (MD-5). (What was I doing there? Running a 5K, and my time was 19:15, thank you very much).

Various proposals have been made to work with other states to help end gerrymandering. Meanwhile, the Supreme Court is addressing Republican- and Democratic-administered partisan gerrymandering, as ordinary citizens have put the issue to the forefront with humorous and poignant displays, like the 2014 Gerrymander Meander. 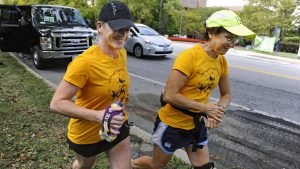 I am far from the first person to conclude this, but the fact of the matter is:

2. We effectively face a prisoners’ dilemma, as neither side wants to disarm before the other.

If asked, point blank, whether or not Maryland should move to a nonpartisan/disinterested/computer-generated redistricting system, my answer would be…absolutely.

First of all, this would be a much better option than letting Hogan do it himself.

Second – yes, this may lose one (maybe two, but propbably one) Democratic seat. But as we’ve seen since November 2016, stranger things have happened. Call me naive, but we could potentially keep those districts blue the old fashioned way – through grassroots activism and, oh, maybe finding a good candidate.

It’s a risk, but a far worse and entirely possible outcome would be to lose in an already gerrymandered district. John Delaney only beat Republican Amie Hoeber 56-40% in 2016, which sounds like a lot but is not in comparison to the trouncing the other congressional races in the state produced. (Or maybe that’s a good thing?)

Some may say they are tired of the Democratic Party, or its Progressive wing, taking the moral high ground and coming up with nothing (this may be true in some cases, such as Bernie Sanders going too easy on Hillary during the primary debates).

My argument is based on the concept that the more small- democratic option will win out in the long run. Take a look at public financing in our county elections. We’ll see how that plays out in the primary, of course, but candidates who have opted into taking public financing have each built a base of small donors that has earned them confidence in their potential to prevail over those taking traditional, private financing, who may have started with a cash advantage in the short run.

Will Maryland Democrats benefit in a similar way if we eliminate gerrymandering, sacrificing an undemocratic advantage in the short term for a more honest victory in the long run?

We’ll have to find out, eventually.