For sure, it’s been a while.

After taking a break following my foray into Ficker land, the MoCo Millennial alter-ego of mine has indeed morphed into a clearly defined advocate for a particular strain of the left.

I do not resent the accusations.

As I got back from Ukraine last week, I came home to unfortunate news that gubernatorial candidate Kevin Kamenetz died suddenly of cardiac arrest, as well as the news that the Washington Post endorsed David Blair for County Executive.

First, my condolences go out to Mr. Kamenetz’s family and residents of Baltimore County. Even if he wasn’t your favorite candidate, no one deserved this. It just shows you, we need to live each day. Because you just don’t know.

The Blair endorsement was somewhat surprising, though not shocking. With the tidal wave of doomsday-outlook articles about the MoCo business climate, I figured The Post would stump for one of the “pro-business” candidates. I did think, however, that they’d go with Rose Krasnow, who has the relevant experience and is the only woman in the race, as she has frequently reminded us. Were I to buy into the business community’s narrative, she would have been my pick, and I’ve only ever had positive interactions with Ms. Krasnow.

To the Post’s credit, they are usually highly critical of wealthy businessmen who self-fund campaigns in order to buy public office as an “outsider.”

Our rather limited sources of local news – the Post, Bethesda Beat, Seventh State, Maryland Matters – have covered in great detail and in a grave, Doomsday-predicting tone the Sage Policy Group analysis of MoCo’s allegedly weak business climate. Empower Montgomery, which David Blair helped found, held a County Executive forum upon the release of the report. Interestingly enough, Blair’s name was conveniently removed from Empower Montgomery’s list of founders as he moved forward with his candidacy. The forum and its preceding Doomsday report received extensive coverage, all parroting the same talking point: that Montgomery County’s tax base is shrinking because its fiscal policies are hostile to business. In other words, we have to grow our tax base by….drumroll….cutting taxes.

This is called trickle-down economics, folks. It doesn’t work.

What is also noteworthy is that the same two-week span featured a Green Forum for County Executive, and a racial equity forum. I attended these forums (at least those that were held after work hours), and they addressed equally grim potential outlooks for the environment, racial justice, and income inequality.

Where was all the media coverage of these forums?

Also, it would be interesting to hear the response if George Leventhal and Purple Line Now collaborated to have their targeted forum, or if Marc Elrich cooperated with labor unions to hold theirs. The Washington Post apparently has no reservations with an organization with close ties to one of the candidates holding a forum with a narrative particularly tailored to the candidate in question.

And yet there is an even more sinister truth alongside the Post’s endorsement. Earlier last week, the Post featured an article about suburban poverty and have housing affordability in Prince George’s County. A majority African-American county that the Post emphasizes “was hit particularly hard by the foreclosure crisis,” PG County serves as an effective foil to Montgomery, which has boasted its wealth while touting its ethnic diversity as an asset. At-large candidate Brandy Brooks noted that for MoCo’s media and business establishment, racial and ethnic diversity is merely an “amenity.”

An “amenity” that the Post laments, comes alongside a population of “immigrants and other lss affluent residents” that “strain local resources and budgets.”

Second – How is that for “soft bigotry of low expectations”? Immigrants in Montgomery County as well as around the country have contributed to great degrees of economic success.

Racial undertones aside, other blogs including Seventh State have noted that Elrich supporters, like your author, need not be overly concerned with the Blair endorsement. In fact, it may play to our narrative, propping up “a wealthy businessman” against “progressive hordes” in a “battle against plutocracy.”

Well, okay then. Here’s what I have to say to that:

Blair will likely open his attack on Elrich with a reference to the term limit vote. Montgomery County voters had their own reasons for supporting term limits, but the bottom line was likely a resounding disapproval with the current County Council. A Council which Marc often opposed on 8-1 votes.

My comparison of Blair with Trump has been called “intellectually dishonest.” While I never equated Blair with Trump in terms of bombastic rhetoric and grotesque demagoguery, the fact remains that both ARE wealthy businessmen self-financing their campaigns as “outsiders.” As is David Trone.

What’s at stake is not just ceding the county to the business establishment’s hand-picked wealthy candidate. It’s the army of individual supporters who contributed small donations of less than $150 as part of MoCo’s public financing option – a first step toward getting money out of politics.

It’s not a demerit toward Mr. Blair simply for being wealthy. It’s the danger that he could edge out a victory by blanketing the county with annoying YouTube ads that interrupt my streaming and 16-page glossy mailers. 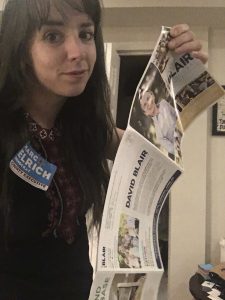 This only shows the grassroots progressives that we have more work to do. We’re ready for it. And we don’t get paid for it.

On June 26th (or in early voting, that starts a month from today), Montgomery County voters will decide whether or not they will surrender to the narrative of select members of the business establishment that props up a “change” candidate, a “political outsider.” Underneath this mask, however, is the further entrenchment of the role of corporate money (be it special interests or the candidate’a own company) in undermining the democratic process.