That’s right. The MoCo Millennial is not gone forever. It’s true, I’ve been taking time away from political blogging since the primary was *finally* resolved in Montgomery County. There were a number of reasons for this hiatus, least of which was how exhausting incessant online fights had gotten.

Also, I’ve come to sort of eat my words after leaving you with a 4,000-word-plus blog on how awful it would be to have “evil corporatist”  David Blair as our County Executive nominee.

Honestly, I take it all back. Or most of it.

I say this not just because Blair endorsed Marc Elrich, or because Elrich brought him onto his transition team. It doesn’t even really have anything at all to do with Elrich – not directly, anyway.

I recently met with Blair’s political director, Lily Bolourian, to discuss having something of a “unity panel” and to clear the air/get through misconceptions about our respective candidates. The conversation went really well, and I must say I learned a lot. Confession: I do tend to get carried away when I latch onto a particular idea, but I’m pretty open to having my opinions evolve with more information, so make of that what you will. When you get past the fact that he is multi-millionaire in the pharmacy benefits industry, Blair actually has a number of progressive stances on social issues as well as halfway-decent economically progressive ideas. Seriously, how “far-right” is a candidate who supports universal pre-K?

Perhaps what was most encouraging was to learn was that a lot of Blair’s base supported him for his socially progressive policies, (which, to be fair, his money did help in getting out the message) and not because he was the “business candidate.” I think what turned me off about Blair the most (besides him not being Marc Elrich) was the gratuitous Post endorsement and the Republicans-turned-fake-Democrats who voted for him because they saw him as the fiscal conservative. Turns out, they would have been wrong anyway.

What I do still stand by is the concept of “Party Unity” being bullshit. It is still bullshit; it always was bullshit. Nancy Floreen’s entire career proves this.

Anyone who derides “Bernie Bros” for not enthusiastically backing Hillary in November 2016, or for daring to vote third party in Chesapeake-blue Maryland, who backs Nancy Floreen in her “Independent” campaign for County Executive is a LYING HYPOCRITE. 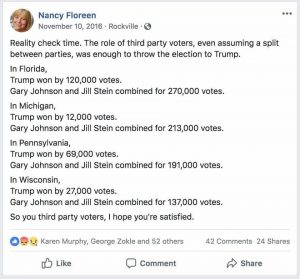 Sigh. You can’t even make this up.

Given that 70% of MoCo voters favored term limits and the fact that both Elrich and Floreen come from the current council, there is an entirely real possibility that Robin Ficker could make it in if they split the vote.

What’s more, is Floreen’s legal-yet-grossly-egotistical entry helps Larry Hogan more than anything. While Democrats should be funneling resources into electing Ben Jealous, they now how to pour resources into keeping Montgomery County blue, while Elrich ends up in a financial bind.   Meanwhile, Nancy will get as much funding as she wants from the real estate development community, and establishment Democrats are not doing their part in endorsing Ben Jealous.

So, yes. Party Unity is bullshit. Pro-corporate centrists shove “unity” down our throats when it’s a Hillary Clinton-type politician, but when it’s a progressive, they take the ball and go home. Who exactly are the whiners here?

I’m going to once again tip my hat to David Blair. He may still be a fiscal conservative – of that, I don’t even know, but at this point, it doesn’t even matter. He lost a hard-fought race, and he wasn’t a sore loser about it. The development community are the sore losers here, as are certain other members of the political elite and business establishment.

It’s time to grow up and practice what you preach, folks. Or at least admit it – you are terrified of progressive candidates because it just might in the very slightest affect your bottom line. To hell with working people who actually want to retain some dignity living in this county.