Recently, Seventh State posted their analysis of the Democratic Primary precinct results, focusing on overall turnout and the gubernatorial primary. They promised a follow-up analysis of the County Executive election – one of the most dramatic and contested elections I’ve ever been involved with. Alas, it appears that Pagnucco and Lublin are on vacation, so I’ll do it myself.

Here is a GREAT map of the precinct results, showing who won, where, and by how much. Credit to Jordan Tessler @JZTessler on Twitter: 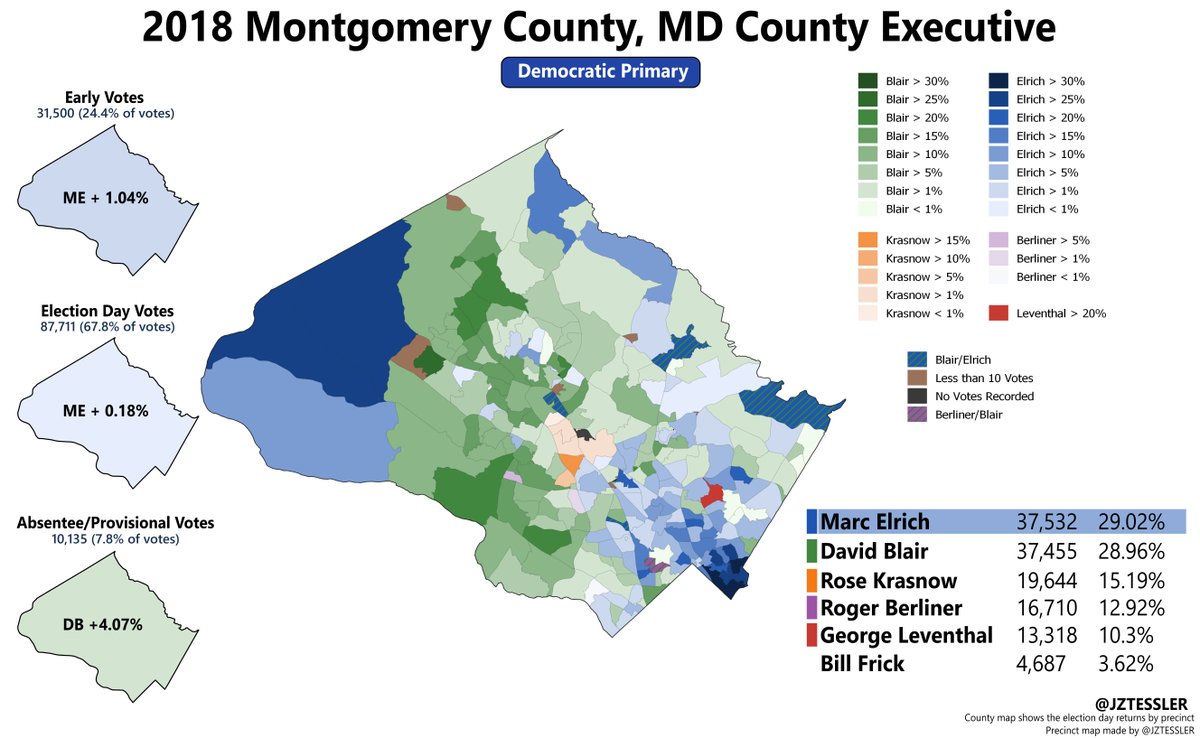 To be fair, Seventh State mentioned a while back that Marc was the top vote-getter in the past two Council elections, coming in first in the majority of precincts, including upcounty. Here, he wins Poolesville (hardly a Beltway-progressive hotbed), Mt Airy, and the dark-blue upcounty area around the Ag Reserve. In past blogs and in some social media kerfuffles, I’ve tried to debunk the notion that Elrich was the candidate for rich white NIMBYs. While it may seem that Elrich’s base is comprised of the strange bedfellows of far-left progressives and anti-development reactionaries, the “anti-development” contingent upcounty suggests not an exclusionary wealthy homeowner demographic, but a legitimately concerned citizen base who would rather not have their nature reserve paved over.

…But Takoma Park and Silver Spring are the progressive heart of the county.

If not the progressive heart of the whole country. Let’s keep it real. Silver Spring is #WokeAF. Having been active in this election for the past year, I (for better or for worse) have attended events mostly in Silver Spring, and there is hands-down not just support that leans Elrich, but legitimate enthusiasm to elect Elrich. Young people see him as our own Bernie Sanders 2.0. Older people know him personally or “go way back” and respect him for his decades of activism and consistent integrity. In Takoma Park live idealists who some may say exist in their own world or have never left their respective liberal arts colleges – but I would argue that Takoma Park liberals have (like me) found their leftist views solidified and hardened as they grew up and saw first-hand the need for racial equity and economic justice. Meanwhile, Silver Spring is home to… literally everyone and anyone. WalletHub ranked Silver Spring as the fourth most diverse city in America in 2018 (and yes, I am aware of the fact that Silver Spring is not an incorporated city). Immigrants, millennials, seniors, working-class people and wealthy people of all races, families, singles, and students live in this expansive suburb and facilitate the free exchange of ideas that contribute to the trend in urban centers leaning left. And Marc Elrich has found a base of support (and volunteers) across all these demographics.

Predictably, David Blair’s home base of Potomac was one of his strongest precincts, but he and his staff hit hard the narrative (whether true or not) that upcounty was neglected, or at least underrepresented, in county government. North of Rockville showed particularly high Blair support, which could have been for a number of reasons. It is possible that some Blair voters did indeed choose him as the “business” candidate and would like to see more economic development along I-270. Likely, Blair’s financial capabilities and hard-hustling ground game, which recruited hundreds of paid canvassers, resulted in this impressive territorial cover, reaching constituents that other candidates did not have the resources, wherewithal, or intensity to reach. Based on my conversations with his staff, Blair accumulated a groundswell of support from young people of color living in upcounty – and not just because he offered them paid canvassing opportunities, but because of his enthusiasm for progressive causes such as gun control and women’s issues.

I reiterate, that Blair may be a lot more progressive than I had thought when I went hard against him – but the Washington Post endorsement(s) combined with the trend in Republicans and Libertarians to switch parties to vote for him as the “business candidate” turned off a lot of younger downcounty progressives.

I would have liked to see official results on this, but a source familiar with the matter said that a poll did show the under-30 voter to go for Marc Elrich.

I found it interesting the blue-and-green patchwork of Council District 4 and parts of East County. While I do not have that much of a hypothesis as to who appealed  to whom  and where and why, I can make a semi-educated guess that this bolsters my point that the vote for Blair might not have been simply an anti-Elrich/pro-business vote. Both candidates had support in East County, and I’d wager that it’s less of a case of intense neighbor rivalry and more a matter of name recognition and progressive positions on social issues.

Rose Krasnow didn’t make it much out of Rockville.

It could be that she entered the race too late. Or that she took public financing and that hindered her fundraising. Or that the Post’s endorsement of Blair and characterization of him as “the business candidate” had overtaken her lane – even though she was arguably the most pro-business candidate in the race, according to the Empower Montgomery “Economic Ballot.” I was personally surprised she didn’t fare better, given the dire need for more women in county government.

Berliner and Leventhal did not inspire

Face it, folks. Montgomery County voters want change. They may disagree on what kind of change – a progressive like Elrich, an outsider like Blair, a pro-business moderate like Rose – but voters did not pass Term Limits so they could see more of Berliner and Leventhal. There were merits to both of them, but nothing that another candidate didn’t provide along with a spark of change. To their credit, both ended up endorsing Elrich after the primary, and have made efforts to pull Democratic voters together. That being said, their messages did not resonate to the same extent as the three leading candidates. We do see one Leventhal precinct and a smattering of Berliner precincts around Bethesda, but not much else. Their respective supporters should be itching for Rank Choice Voting from here on out.

Elrich narrowly won the precincts along the Purple Line.

I’ll leave this up to your own interpretation 🙂