Happy New Year,  MoCo and beyond!

To be honest, I don’t necessarily agree with people who say that they are glad 2018 is over. I thought most of 2018 was exhilarating. For the most part, it ended well (electorally speaking). It could have been better for sure, but it wasn’t bad. I have to say I will miss going out there canvassing and holding campaign events and such. Next time around.

That said, I’m not going to speculate on national elections for 2020…yet. I’ll weigh in on that sometime in the future. What I do want to throw out there are some lessons for 2019…the year where we put our money where our mouth is (literally?) This is what I think Democratic voters – not necessarily just the millennial left – should keep in mind this year.

1. Scrap the Centrist vs. Progressive narrative.

I know I’ve fallen into this trap myself. The media certainly has, from CNN to MSNBC to the Young Turks, everyone is trying to make the case for either moderate Democrats or progressive/socialist Democrats being the answer to take on Trump in 2020 or win swing state elections or what have you. We certainly have competing cases – Moderate Conor Lamb winning in Pennsylvania, Andrew Gillum losing Florida after campaigning with Hillary Clinton,  centrist Claire McCaskill losing in red state Missouri, Ben Jealous winning the primary but then losing as predicted, a wave of progressive newcomers like Alexandria Ocasio-Cortez taking out centrist incumbents in blue districts, moderate Democrats in Virginia winning convincingly over Republicans, and our Marc Elrich demolishing center-right Nancy Floreen in the general election. One might be inclined to assume that Alexandria Ocasio Cortez or Marc Elrich could only win in deep blue districts and moderate Democrats are what is needed in swing districts. Beto O’Rourke, who is charismatic but with a rather centrist voting record, overperformed in Texas, but Claire McCaskill and Joe Donnelly did not benefit from their pivots to the center-right. Sherrod Brown, a possible presidential candidate, is a labor Democrat who won in Ohio, which voted for Trump. Basically, everyone is going to have their own argument about who wins or loses where, and why.

We need to throw this reasoning out the window.

This is why pro-labor politicians win in the Rust Belt. Ohio, Pennsylvania and Michigan did not reject Hillary Clinton because she was just too liberal. They saw that the Clinton brand of the Democratic Party was not delivering and they chose to break glass in the event of emergency (and now are left with a mess of broken glass).

In Virginia, Danica Roem won against a transphobic blowhard not simply because she is transgender, but because she focused on improving traffic on Route 28.

Looking at Maryland, I somewhat agree with the analysis in Seventh State as to why Ben Jealous lost. My personal impression of Jealous was that he didn’t appear well versed enough on the nuts and bolts of the issues during his debates. His initial statements on the Kirwan Commission did not fly well with Montgomery voters who are worried about the prosperous County being treated as an ATM for the rest of the state. His arguments on how to fund a statewide single payer healthcare system were not sound enough, even for those who agree with him on principle. I agree with the conclusion in Seventh State that Jealous would have won against a right-wing extremist, but juxtaposed against a (perceived) moderate like Hogan, Maryland voters were just not sold on Jealous’ message – especially when some supporters attempted to lean on Republican racism and identity politics (which I generally find to be a dead end).

That said, I would disagree with any assumption that Ben Jealous was too left wing. Montgomery County voters chose Ben Jealous 54%, but chose Marc Elrich 65%. Elrich is considerably to the left of Venture Capitalist Ben Jealous, yet he campaigned on issues that people cared about, like development and transit and schools. Jealous, on the other hand, had support from an enthusiastic pool primary voters which pretty much dissolved in the great ocean of general election voters. A lot of us saw him as a movement politician versus a Maryland-focused candidate.

My conclusion is that Democrats voting in primaries should abandon ideology-based litmus tests and focus on where they stand and how they prioritize issues that Americans are most concerned about, which varies from region to region. We may not reach everybody on gun sense issues or gender politics, even if we wish we could, but we will most certainly reach people in the swing states if we focus on their underlying economic anxieties.

As much as I think candidates need to cater to what is most concerning to great swathes of voters, the general populace still seems to have a blind spot when it comes to climate change. The vast majority of activists and young progressives may support initiatives like the Green New Deal, but I’ve seen a fair number of polls that unfortunately rank environmental issues far below other concerns. One such poll is the Gonzales Maryland Poll taken last summer. At this time, Maryland voters were far more concerned about removing Trump from office than anything else, and education, jobs, public safety, and opioids came in before addressing climate change. I have seen similar but informal polls taken around in Montgomery County that show environmental issues lagging behind in priority. It appears that most voters recognize that it is a problem, but find more urgency in other issues. This is unfortunate. I have been saying, especially to people that like to recite “we need to expand our tax base,” that there will be no economic growth in a state that is underwater. The younger generation, which faces more dire consequences for the previous generations’ neglect of the issue, tends to put more emphasis on climate change. My recommendation is that younger activists team up with scientists and business leaders to make the case that environmental issues are not some box to be checked off at the bottom, but an integral issue that applies to jobs, health, safety, and every other priority.

Speaking of the young and the old…

3. We need to learn from our elders AND empower the youth.

After we throw out the Centrist vs. Progressive narrative, we need to throw the Old Guard vs. Young Newcomers dichotomy out with it. During this election cycle, age has been used both against and in favor of candidates. I’ve heard Bernie Sanders (age 77) described as too old to run for president, by people who support Joe Biden (76). Incidentally, this very statement has been uttered by my mom (69). My personal postings have shown a love-hate relationship with Nancy Pelosi (78), who has shown strength in some areas but rigidity in others. And yet our superwoman, RBG, is 85 (though she may be the exception to everything).

My three favorite political figures represent three different generations. Marc Elrich, a Baby Boomer the same age as my mother, brings wisdom and experience of the civil rights era and recognition of where we have made woeful progress in racial justice issues. Alexandria Ocasio-Cortez, a millennial, is someone who “gets it” in terms of what people our age are most worried about (climate change, student loan debt, livable wages…), and she brings energy and feistiness that we find to be a breath of fresh air. She does have a learning curve, I’ll give you that – and who better to teach and nurture her political career than incoming leader of junior House Democrats, Jamie Raskin, representing the elder Gen-X as well as my home district?

Tying the older and younger generations together, Ocasio-Cortez made a very Elrich-like comment on real estate development in a recent tweet: 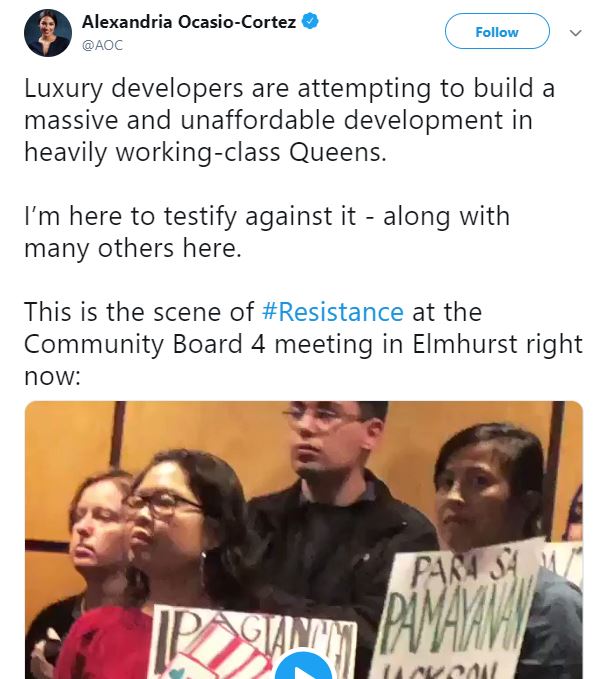 Both the curmudgeonly so-called NIMBY Elrich and the energetic millennial Ocasio-Cortez are concerned with developers accelerating gentrification with luxury, unaffordable housing. I guess GreaterGreaterWashington is wrong when they assume progressive millennials are on board with their narrative that housing will become more affordable if you increase the supply by lifting regulations on developers. Go figure.

This goes for Republicans, Democrats, conservatives, liberals, progressives, centrists, socialists, EVERYONE. When we waste hours upon hours of our days calling out people for being offensive, or making fun of others for being “triggered snowflakes,” or saying anything we disagree with is “fake news,” what exactly are we accomplishing?

Pivoting from the daily Trumpertantrums to my observations in Maryland, candidates who whined the most did poorly. Instead of naming names, I’ll leave it up to the interpretation of readers who followed state and local elections this year.

Some armchair critics on social media continue to whine and complain about what they think some of our new electeds will or won’t do, but fail to propose any feasible alternative. I’m all for holding someone accountable, even if – no, especially if – you voted for them. This goes beyond complaining on social media (or cherry-picking quotations to bitch about on social media). This year, don’t just march with pink hats and signs. March up to Rockville or Annapolis and make your case with data and solutions and do your homework. Policy will not be reformed in the comment sections on Bethesda Magazine.

Quit bitching and get to work.