Your author just got back from her backcountry, off-the-grid vacation and missed the massive town hall held in Silver Spring on Sunday.

Imagine a world where the NIMBYs and YIMBYs unite in opposition to a wrongheaded, regressive proposal from a “popular” Republican governor. Stranger things indeed happen.

On Sunday, a crowd of over 700 came to the Silver Spring Civic Building to voice opposition to Gov. Larry Hogan’s proposal to add lanes to 495 (the Beltway) and I-270 by widening both highways. Hogan had initially claimed that the highway widening would not take homes and businesses, but later fleshing out of the proposal proved otherwise. According to the Hogan administration’s report released in April, over 1,500 properties would be “directly affected,” with 34 homes and four businesses destroyed.  Moreover, the Maryland Park and Planning Commission determined that over 3000 acres of Rock Creek Park, the DC area’s central oasis, would be taken.  This makes sense, and, it could possibly be worse. After all, the space needed will be not for just new lanes, but completely new constructed on-ramps, exits, and barriers.

Not only did Hogan’s highway plan generate opposition from the expected groups of environmentalists and NIMBYs (of both the tree-hugging and the get-off-my-lawn varieties), it also generated opposition from urbanists. Action Committee for Transit, a transit advocacy organization generally aligned with the views of Greater Greater Washington, tweeted in favor of County Executive Marc Elrich’s assessment of the plan. Elrich, who is normally the elected official the urbanists love to hate, cited the LBJ Highway in Houston as an example of the undesired and (presumably) unintended consequences of adding lanes to highways: displaced families, destroyed businesses, and induced traffic demand.

If You Build It, They Will Come.

Induced demand means what you think it means. Citylab explains the phenomenon in its piece about the Houston highway widening:

Just as with the Katy Freeway expansion, adding new roadway capacity also creates new demand for those lanes or roads, maintaining a similar rate of congestion, if not worsening it. Economists call this phenomenon induced demand: When you provide more of something, or provide it for a cheaper price, people are more likely to use it. Rather than thinking of traffic as a liquid, which requires a certain volume of space to pass through at a given rate, induced demand demonstrates that traffic is more like a gas, expanding to fill up all the space it is allowed.

The CityLab article refers to “induced demand” as a key point for urbanists:

If there’s any issue that will get the urbanist crowd and the Elrich gang to agree with each other, it’s this one.

FiveThirtyEight ranks Larry Hogan as the second most popular governor in the nation, and as a remarkably popular Republican governor in a deep blue state. Hogan’s second term was greatly assisted by a coalition of Democrats for Hogan, which brought the Republican within ten points of winning solid blue Montgomery County.

On Sunday, however, the popular, never-Trumper Republican engaged in Trumpian namecalling, which got him ratioed on Twitter: 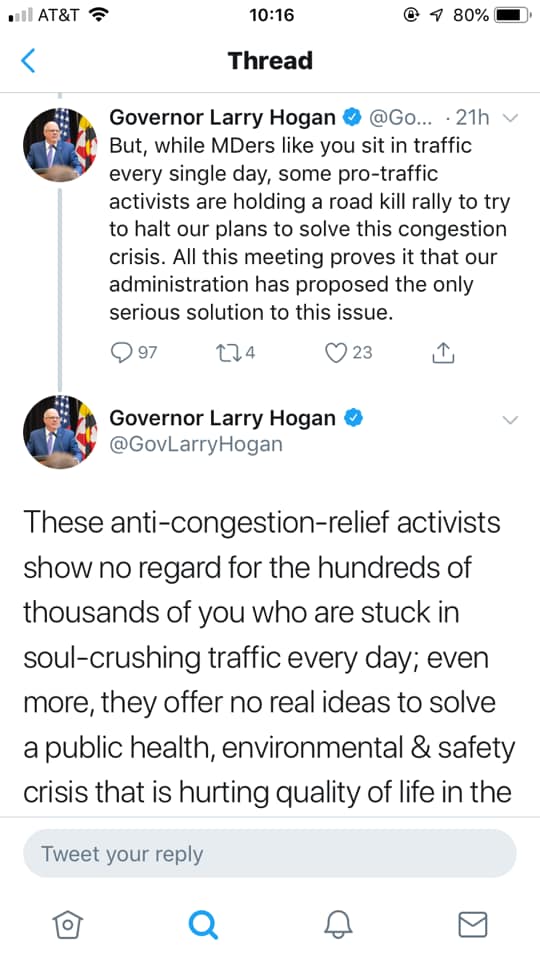 In case you didn’t know, to be “ratioed” on Twitter means that your tweet gets more negative comments than likes or retweets.

So You Think You Want To Be President

Hogan has frequently billed himself as a “bipartisan moderate” and an anti-Trump Republican, and has denounced Trump and his overly simplistic thinking and inane tweets such as this one above. He’s even gone so far to cast himself as a Republican primary alternative to Trump, should Trump be impeached or forced to resign or (hopefully) imprisoned.

And yet, Hogan is finding out that the GOP has no appetite for bipartisan moderation or centrism. The GOP is entirely the Party of Trump, so I guess it’s just as well that Hogan would start acting like it.

Anyways, I only wish Hogan would take a holiday in China and then reconsider his proposal.